Fr Luigi Savoldelli sm, writes: I would like to begin my article by focusing on the experience that I have been living with African confreres and the people of Cameroon for some years now; our experience is grounded in the encyclical "Laudato Si'" by Pope Francis. The Agricultural project that we began as Marist Fathers of Cameroon, working with a group of poor, local, people has its origins in meditating on this encyclical, and finding a way to develop and express its meaning.

The Nkoloman II community field project, which began in 2014, is in the heart of the forest on the outskirts of Yaoundé. The area of this field is 5 hectares (50,000 m2) and to date we have planted 7,000 cocoa plants, 13,000 banana plants and 95 fruit trees (oranges, plums, papaya and avocado). With this project we want to create opportunities for young people and families in Cameroon. We want to involve fathers and mothers in agricultural activities to enable them to have a job opportunity and respond to the needs of their families in a dignified manner. At the same time we want to involve young people and train them in the care and work of the land, generate in their interest agricultural techniques with the aim that they are self-sufficient both from an economic point of view and have the ability to introduce new technologies for food production; an investment for the young people of this place so that they can fall in love with their land, respect it, love it, consider it the first gift of God, the common good, to build a community of solidarity, to be independent and to form their own family without having to leave their country.

Working to create such conditions and opportunities means working to ensure that young people and families do not have to leave their land because of poverty, by making journeys to the mirage of the West, journeys often characterized by hardship, humiliation and deprivation and which all too often see the weakest die in the hope of a better life. 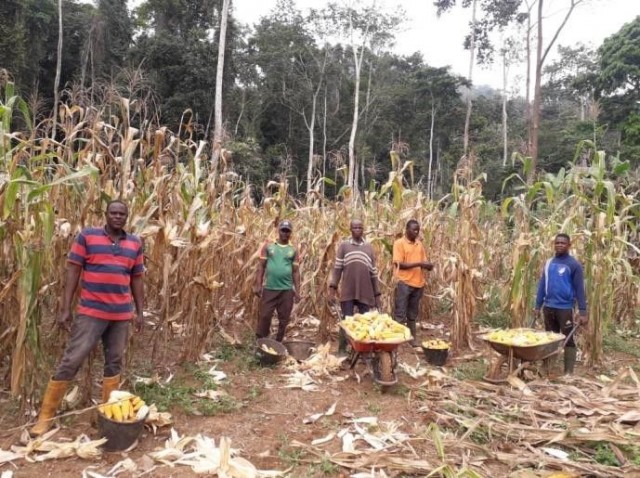 In the years 2017 - 2018, we Marist Fathers of Africa have created a biological vegetable garden in the field of Nkoloman II.The vegetable garden was built by reclaiming an area of about half a hectare of previously marshy swamp. The reclamation was carried out with local labor, through poor and rudimentary tools such as wheelbarrows and buckets. The people entered joyfully into this manual activity, including the monotonous work of clearing the weeds.

Thanks to this we can boast that we currently have a beautiful vegetable garden with vegetables and legumes of all kinds; we have managed to grow vegetables and plants such as: basil, salads, radishes, beans as well as legumes typical of this land, such as: zum, fulom, watalit, macabo and a corn field. All of these crops have been possible even during the periods of drought, which periodically affect us given the equatorial climate, thanks to the water of the well that we have dug in the past and that we have managed to realize thanks to the generosity of many Italian benefactors. All the vegetables and products we make are intended for the livelihood of local communities, both for the families who work with us in our Community and for the sale of surpluses to the market, the proceeds of which are intended to cover the expenses of the families themselves. 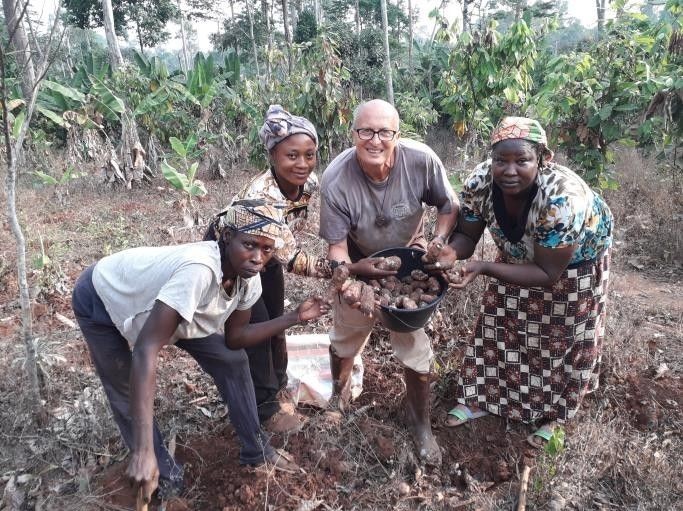 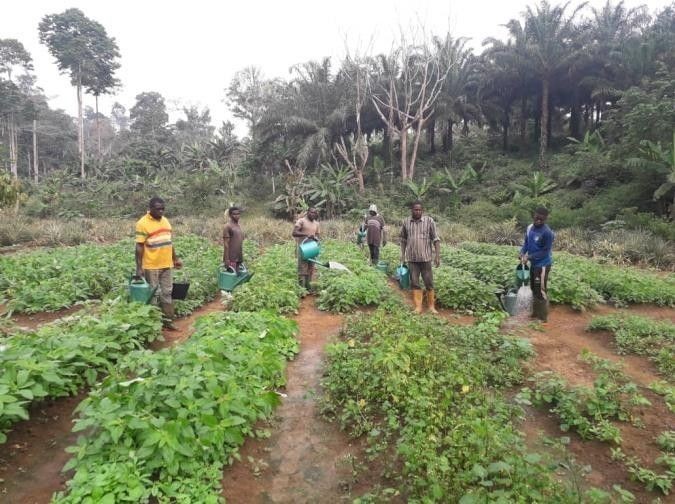 In addition to cultivation activities we also have animal and fish farms. One of the last interventions carried out consisted in strengthening and enlarging the existing chicken coop (equal to 30 m2), repairing the fence damaged by bad weather and building another new one next to it. The need to enlarge the first chicken coop and build a second one is due to the fact that we bought free-range chickens, which will become hens; the hens will make a quantity of fresh eggs every day so that we can have enough eggs for the food of all families and also be able to sell them on the market, making some money for some household expenses. This second chicken coop, which houses broilers and has an area of 90 m2, was also made possible thanks to the generosity of our friends MMC (Marist Missionary Center of Australia).

For about two years we have expanded the project with the start of fish farming activity: three bodies of water have been dug on the land of our property and the breeding of carp, viper fish and silleuco has started. Since last June we have started breeding pigs and at the moment we have 25 of them, which is why it has become essential to build an adequate pigsty, for an extension of about 75 m2.

Finally, a few weeks ago we started breeding rabbits: at the moment we have six, but we are confident that we can increase their number. Thanks to the involvement and economic support of many Italian friends we managed to build a rabbit house, with a cage complex arranged on three floors, for an area of 18 m2. 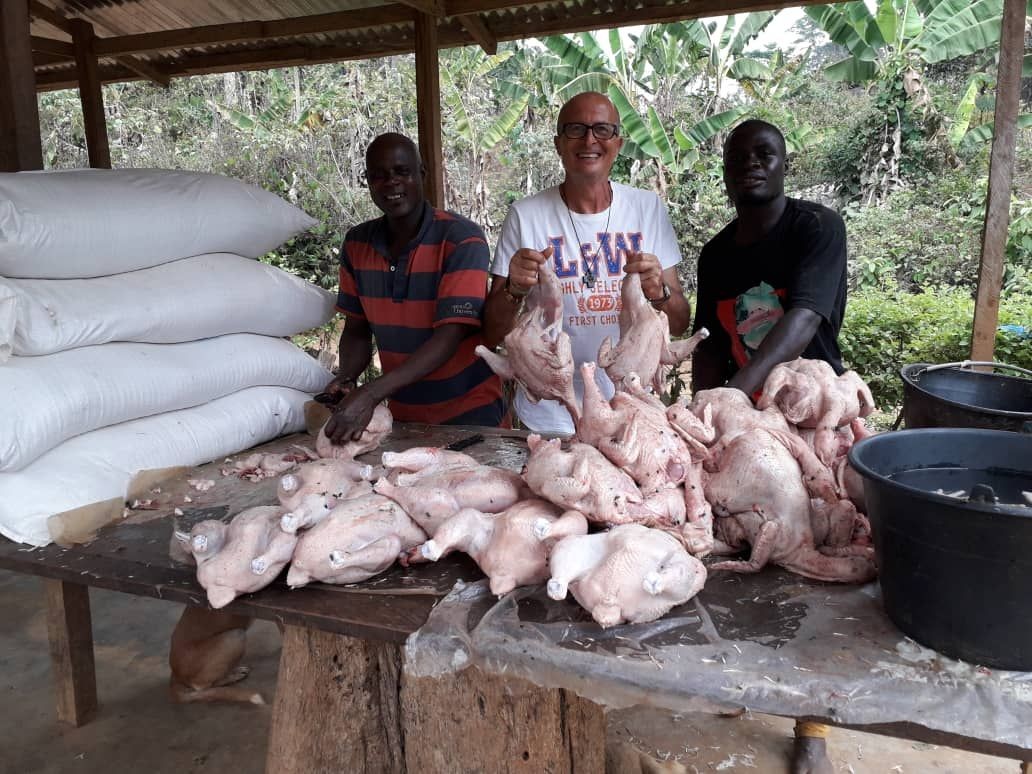 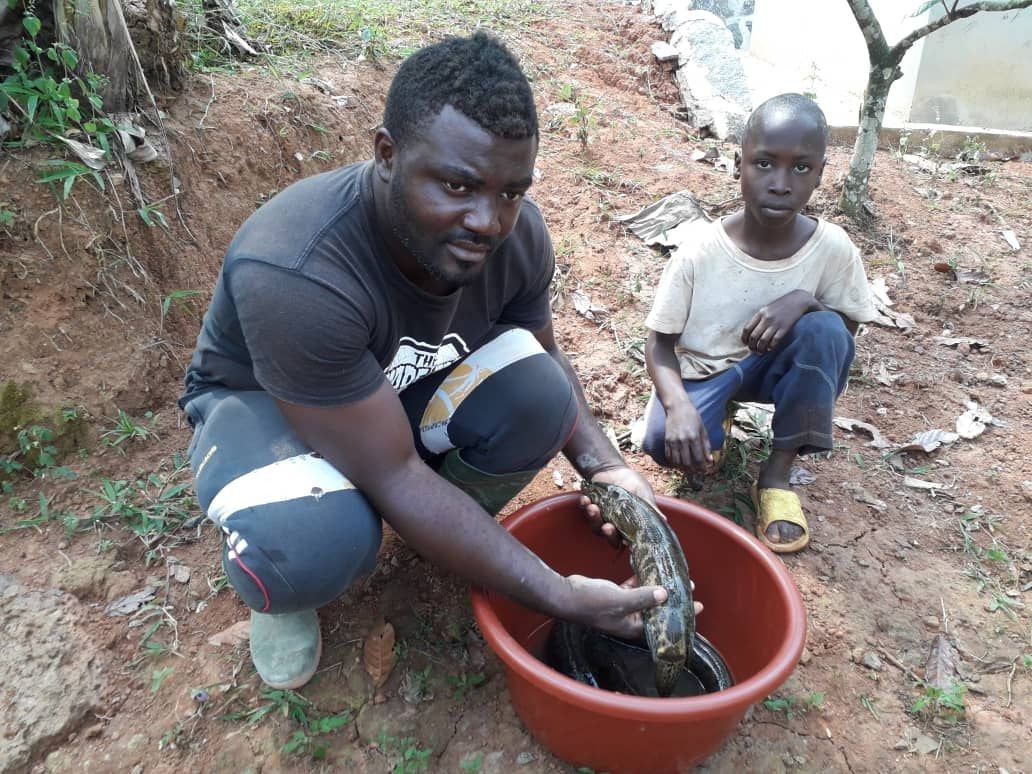 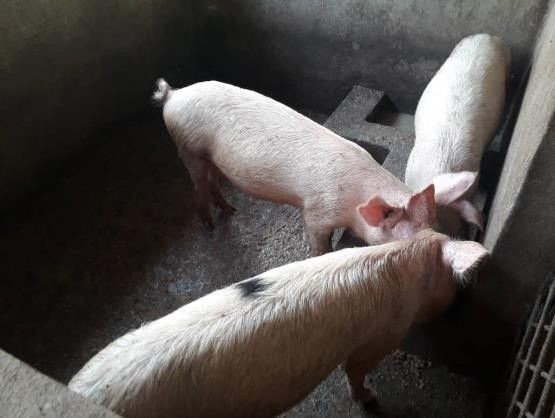 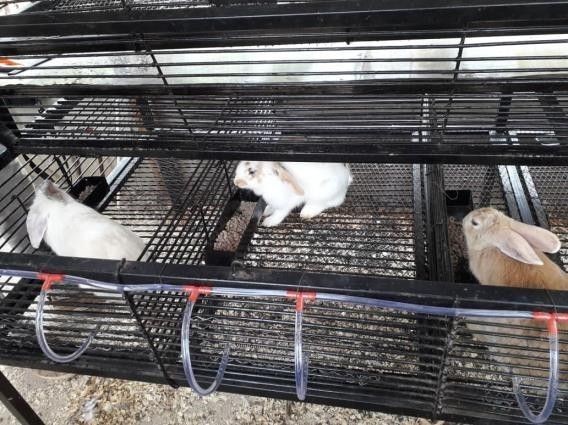 THE DESIRE TO GROW EVEN MORE TOGETHER

To date, about 20 people are involved in the cultivation, including some families, young people and some students. Given the good results achieved in recent years, we want to continue to invest and expand the size and diversify the products of cultivation and breeding. This will be more than useful in enabling new families and young people to have a decent life opportunity in their own country without having to think about emigrating abroad.

The "Laudato Si' project is an important opportunity for this community and is possible thanks to the generosity of many Italian friends sensitive to the words of Pope Francis in the Encyclical "Laudato Si": "The urgent challenge of protecting our common home includes the concern to unite the whole human family in the search for sustainable and integral development, as we know that things can change. The Creator does not abandon us, he never backs down in his plan of love, he does not regret having created us. Humanity still has the ability to collaborate to build our common home.

I would like to express my gratitude, encourage and thank all those who, in the most varied areas of human activity, are working to ensure the protection of the home we share. Those who fight vigorously to resolve the dramatic consequences of environmental degradation in the lives of the world's poorest deserve special gratitude.

Young people demand change from us. They wonder how it is possible to claim to build a better future without thinking about the environmental crisis and the suffering of the excluded.

I urgently call for a renewal of the dialogue on how we are building the future of the planet. We need new universal solidarity.

As the Bishops of South Africa have said, "the talents and involvement of all are necessary to repair the harm caused by humans on God's creation." We can all work together as God's tools for the care of creation, each with their own culture and experience, their own initiatives and abilities." ("Laudato Si'"n°13-14)

The spirit of collaboration and solidarity has characterized these works more than any other aspect: the collaboration between the workers of cultivation and the solidarity of our Italian friends have allowed this project, which seemed impossible, to take shape and consistency. Today the project is progressing very well, both with regard to the crops that and allows the dignified livelihood of the families and young people participating in the project itself. 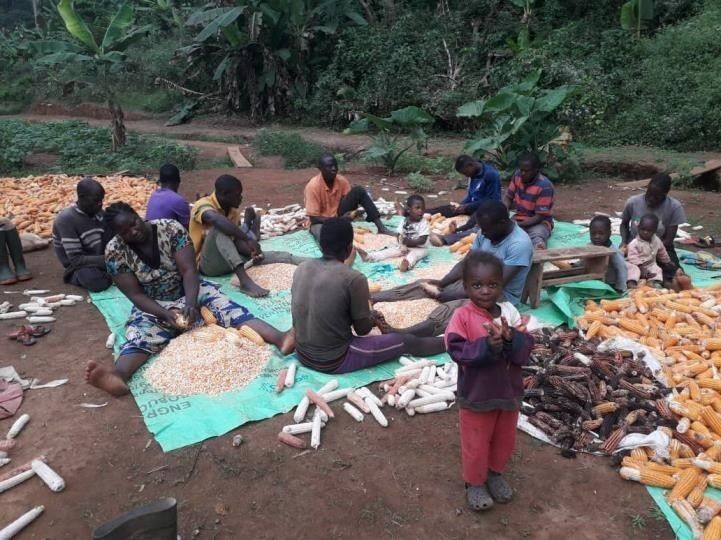 Dear Luigi and Ben,
This has to be one of the most inspiring and engaging ecological and mission projects that has been presented. It falls in line with Laudete Si 7 year roll out project, that 90 of us Marists are involved with the Vatican Dicastery.
Thank you so much for this presentation and for the planning for these projects. God bless you all!

Cancel Reply
Dear Luigi and Ben, This has to be one of the most inspiring and engaging ecological and mission projects that has been presented. It falls in line with Laudete Si 7 year roll out project, that 90 of us Marists are involved with the Vatican Dicastery. Thank you so much for this presentation and for the planning for these projects. God bless you all!
Cancel Update Comment