Del Rio - a Can of Worms Haitians at Del Rio - Texan Border
Fr Tony O'Connor sm writes from Texaa: "DEL RIO" is a Texan town of some 35,000 people some 230 kilometers west of San Antonio on the Rio Grande River with an international bridge connecting with the town of Acuña (215,00 Pop) on the Mexican side. It is a quiet out of the way connection with the two countries and with very reduced border patrol facilities.
The first photo below shows Haitians and Central Americans at Del Rio.  The  second shows them camped under the International Bridge at Del Rio. 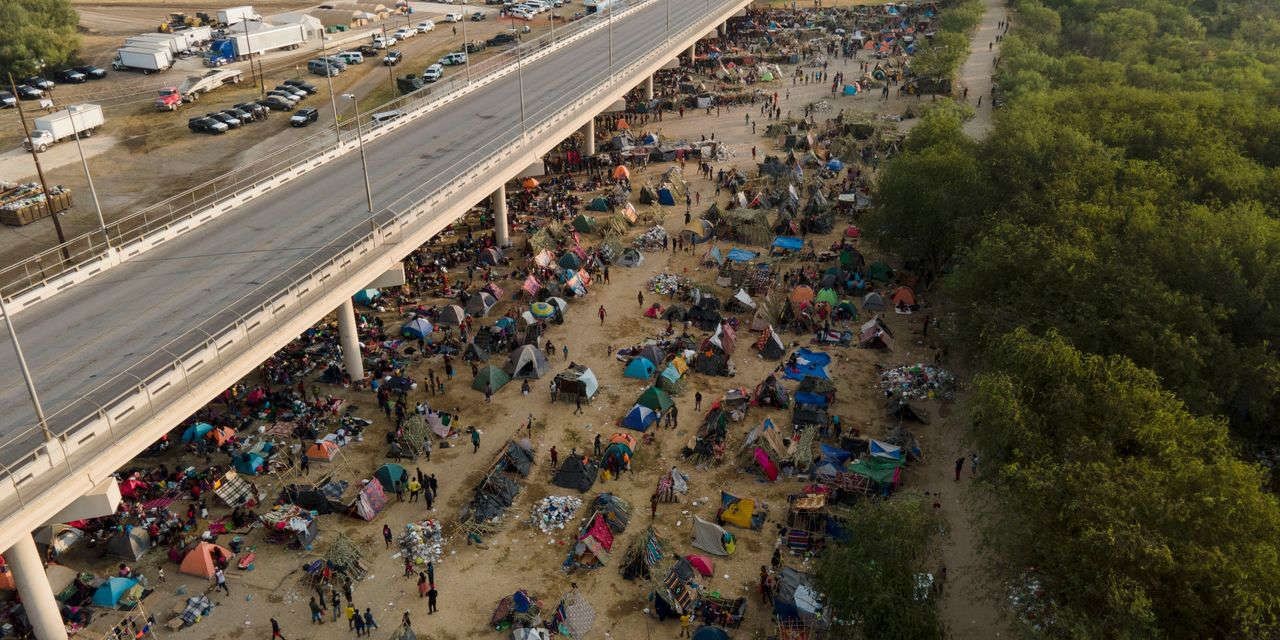 The stretch of border near Del Rio became the second busiest Border Patrol sector this year with nearly 215,000 arrests out of 1.47 million across the entire border since October 2020. Below are maps of South Texas, and Del Rio.A

But in recent days up to some 15,000 migrants mainly Haitians (but other nationalities including Cubans, Venezuelans, and Nicaraguans) crossed the river over the span of a week, by wading over a dam on the river and were then blocked from moving forward . So they made camp under the international bridge on the US side thus creating yet another crisis and for anti-Biden critics a reason to make a lot of noise.

President Biden has three big handicaps at present: the aftermath of the Afghanistan withdrawal; the increasing COVID crisis; and opposition to his big 3.5 trillion dollar infrastructure bill.

President Biden promised a more humane approach to immigration as compared to his predecessor Donald Trump, but he has fought to stem the tide of migrants crossing the border since taking office in January. On the one hand to appease the hard-liners with authorization for Title 42. Plane loads of different nationalities and recently Haitians are being deported to their homeland .In contradiction at the same time US immigration are releasing "numerous" migrants not just in southern cities but deep into the interior of the country in a revolving door system giving concern that it is a free pass into the US . With destinations like Chicago, Denver, Mediapolis, Yakima, Washington and Harrisburg PA migrants fall into the custody of Immigration and Customs Enforcement (ICE), and many migrants are often later released.

[The then President Trump enacted the health measure known as Title 42 allowed for quick expulsion of asylum seekers to prevent the spread of COVID. President Biden continued the policy but exempting children and some families.] The photo below shows migrants being returned to Haiti. 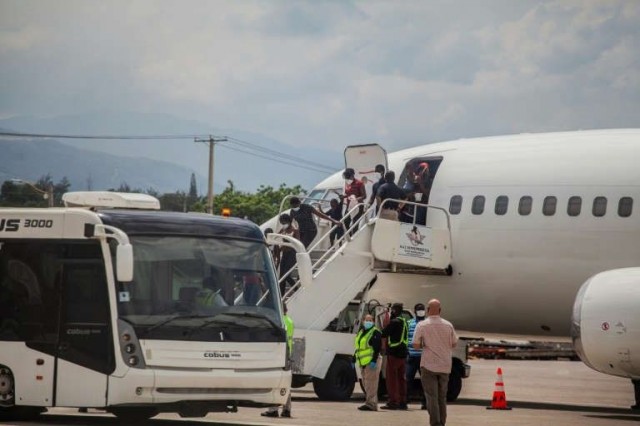 Del Rio is the "volcanic eruption of the moment" and it is mainly the Haitians who are in the line of fire. Haiti is the poorest country in the western world. It suffered a catastrophic earth quake in 2010, a presidential assassination and another earth quake this year. The last ten years has seen a diaspora of Haitians to South and Central America especially Brazil and Chile and as those areas were hit with economic down turns caused by COVID the Haitians began to turn their gaze northwards to where they always seem to eventually desire to arrive, the USA. Their concentration in Del Rio happened the Hispanic way, invitation by word of mouth between migrants. Now is the time. Comments have it that there are some 20,000 Haitians in northern Colombia, 1500 in Panama and 3,000 in Peru that are gazing northwards. Will the threat of deportation deter them from traveling north in large numbers? If they have lived a significant time in other countries this does not give them asylum seeker status in the USA. 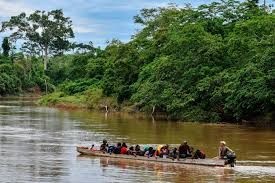 The predominately Haitian problem is no small deal. Many have to cross the Darien Gap. Panamanian immigration says the number of people crossing the Darien Gap between Panama and Colombia has reached record levels, with 70,000 migrants making the dangerous trek so far this year and registering at shelters in Panama. Most currently crossing, are Haitians from Chile and Brazil. Visa requirements make it almost impossible for low-income Haitian migrants to take flights to Panama, Mexico or the USA. So many take the dangerous trek across the jungle in the hope of starting a new life in the USA. "The jungle is tough, dangers are plenty. Some migrants keep snakes away by tying pieces of garlic to their ankles or rubbing disinfectant on their legs . The greatest danger are other humans. In the Darien, armed groups control trails that are also used to traffic drugs. Bandits often target migrants and steal their possessions. In the months of May and July 96 women were sexually assaulted. The most frequent illnesses are foot funguses, gastro intestinal problems and respiratory infections". "We just walk without a precise idea of where we are headed". Children have reportedly died in the jungle and some pregnant women have given birth. Migrants say they have seen skulls and cadavers along the routes. Fear is always with them . "They have no other choice than to keep going."  A harrowing video of the Darien Crossing can be viewed here 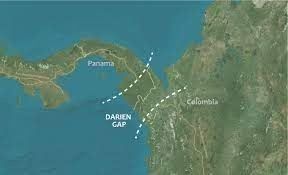 So you can imagine that the last thing these poor people desire after a long and arduous trek taking years is to be deported to their homeland, the poorest country in the western world! México has begun to deport Haitians. Mexico only accepts migrant from Guatemala, Honduras, and Salvador. Probably those Haitians who have been in South America: Brazil, Chile, Peru, Ecuador, Colombia are undocumented - meaning that they aren't able to be deported legally to those countries. Nor can they be deported to Mexico because under international law, you have to be deported to the country where you have legal residence or a country that agrees to accept you. For me thanks be to God the Biden government seems to be being forced by circumstances to acting somewhat ambivalently: deporting single Haitians, but protecting and keeping minors and some families and allowing many to be processed all over the country and then being released. This ambivalence is nothing new. That is what has been happening for years.

So some say with much feeling "How horrible, these poor people living in squalor under the bridge are now being deported to Haiti after so much suffering and efforts to seek a new and better life among us.   [Photos below 1. Central American Migrants; 2. Haitian Mums and their children; 3. Dust Storm at the Camp 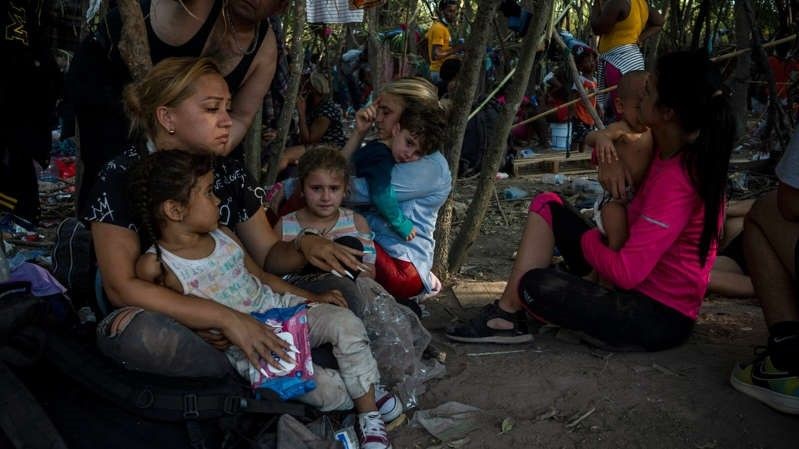 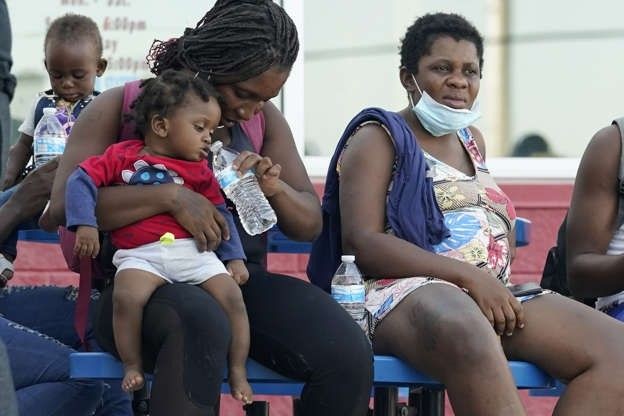 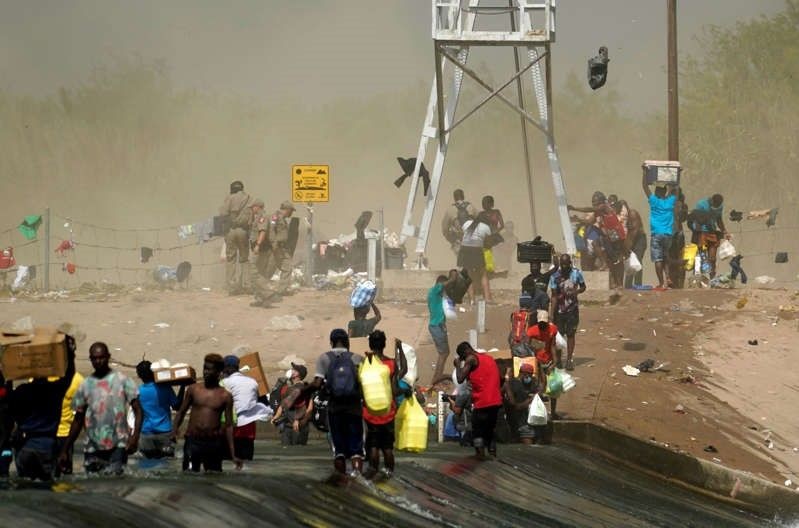 "Give me your tired, your poor, Your huddled masses yearning to breathe free, The wretched refuse of your teeming shore.Send t hese, the homeless, tempest-tossed, to me: I lift my lamp beside the golden door."

Others , and there are many who on the other hand say "How terrible, they are letting these aliens into our country . This attitude is reasonable but as the second video shows, can have its negative and cruel consequences. 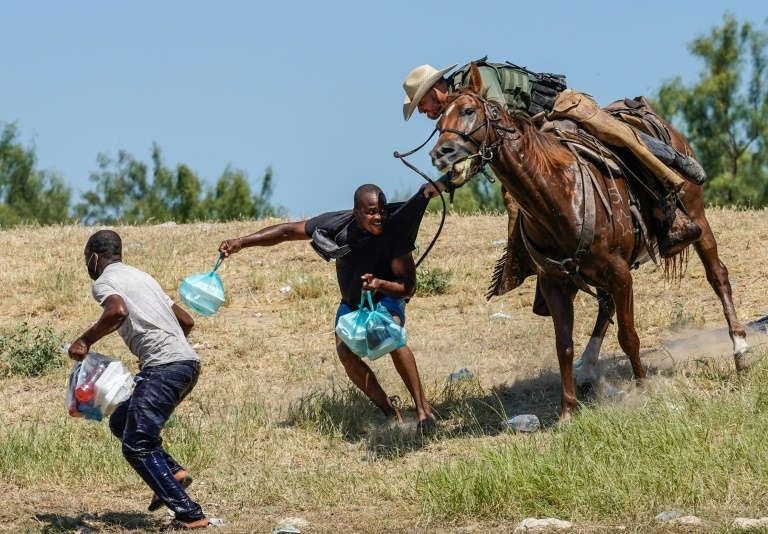 Yet for years our broken congress seems unable or unwilling to gradually legislate a just and reasonable migration reform.

It truly is a "Can of Worms" situation and the "powers at be" with the job to fix it find themselves "between a rock and a hard place" allowing the option of ambivalence: to send a deterrent message by deporting: and allowing entry into the US many more for at least pragmatic reasons taken the grave humanitarian crisis on the border exacerbated by the Del Rio phenomenon. Del Rio is an erupting volcano, but underneath the whole southern border there is much so called magma and lava from a buildup of many decades.  Photos below: Haitian child,  Father and son, Father and daughter. 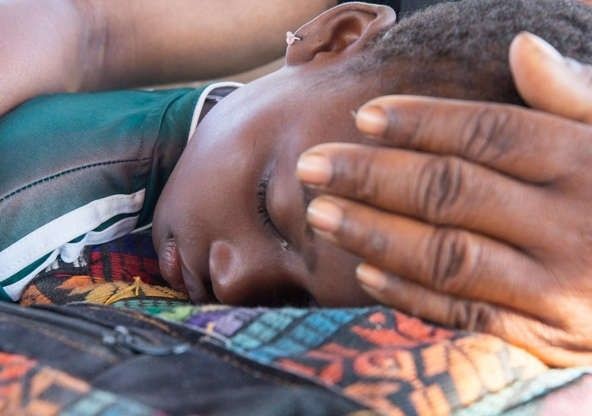 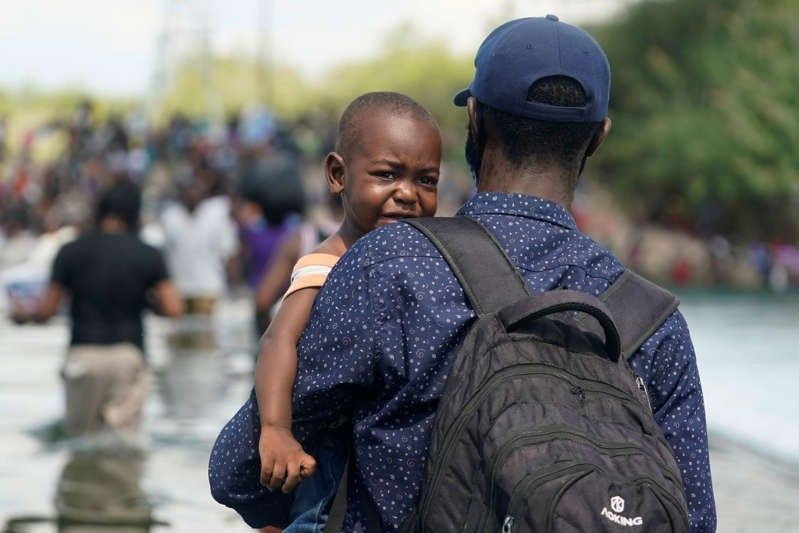 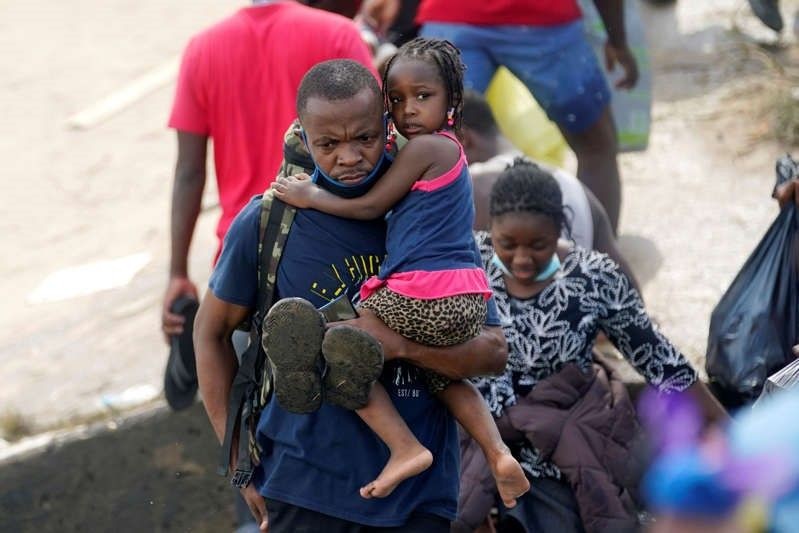 As I finish this blog new things are happening in Acuña City . Mexican authorities began rounding up Haitian migrants fleeing the encampment on the US side amid food scarcity and fears they will be returned to Haiti . Most Haitians don't request asylum in Mexico because they want the freedom to travel to the US. Those that have requested provisional asylum must stay in the state where they received it. If they move from Tapachula in Chiapas to Acuña City they have no legal status so can be transported to the Mexican detention center in Tapachula from whence they could be deported to Haiti since Mexico has a repatriation agreement with Haiti since 2016. A catch 22 situation. 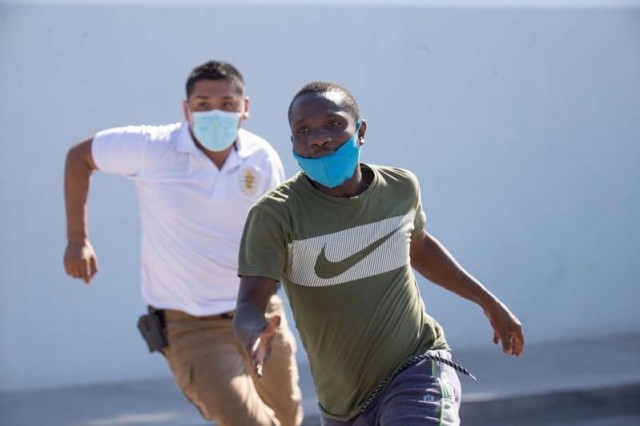 The US and Mexican authorities are attempting to reduce the numbers in the camp under the international bridge and remove momentarily the danger of a "powder keg" exploding in so many ways. Meanwhile our hearts go out to so many poor poor Haitians who have sacrificed so much, come from so far and who are trying so hard to seek a dignified life for themselves and for their kids.

The reporting of this phenomenon has become very political and social media led by Fox News, Washington Examiner and others certainly give their own spin. I stick to Reuter, CNN and other sources who are not perfect but I feel seek to just give the facts.

Thank you
Makes my prayer today much more grounded

Tony, My thoughts and prayers are with you. Wish there were some way I could be involved . May God bless you and keep you safe. Peace. Joe McLaughlin

Cancel Reply
Tony, My thoughts and prayers are with you. Wish there were some way I could be involved . May God bless you and keep you safe. Peace. Joe McLaughlin
Cancel Update Comment
1