The Holy Family is still among us
The theme this year, 2020, for the week of Prayer for Christian Unity [18-25​ January], has been "Unusual Kindness" - words of St Paul, when given this experience during his own shipwreck off Malta. We share in this blog, in a timely way, stories from Tony O'Connor sm, working with People on the Mexican-USA border, who so much need those experiences of being shown an "Unusual Kindness". ​ 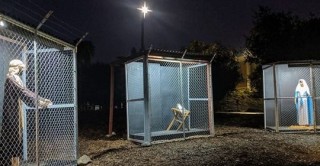 Juan from Salvador, 16 going on 17, a tall stocky lad, well-spoken and decent hearted , arrived two weeks ago , crossed the river and was picked up by the border patrol a couple of hours from here. Is now in a center for migrant minors. They took him first as they do to all, to the processing compound called the "Hielera" (icebox) because the temperature is kept at 55 degrees to avoid the spread of bacteria!!!

Juan was asleep at 11.00 p.m., when "una gringa" a white north American I.C.E. (Immigration and Customs Enforcement) (official woke him and took him to an office where he was drilled all the night. This is what his interrogator did according to Juan.

"She took me into a small office and began to grill me. Her tack was that I was over 18, and her attack was that I was there with all these minors under 18 as a sexual predator. She was relentless and the questioning, counter questioning, accusations went on all night. I was tired after 9 days of tiring and frightening travel in jam-packed cars and crowded trucks. from Salvador. And it was cold, she was relentless talking about a reality that just was not true. She cowered me into silence and brought me to tears. After she left I was returned to the cage with the other kids and thanks be to God I was released within 24 hours.Memory of the "hielera" (ice box)and that "gringa " is ingrained in my nightmare memories, and haunts me still. 19/12/19 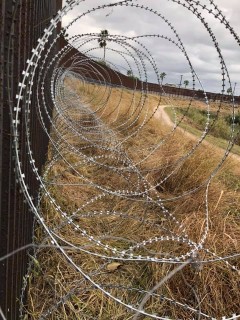 Razor wire at the border

THE HORSE AND THE FRUIT TRUCK.

I met Meche over two years ago. She came to the parish seeking help.She and her husband travelled around Cameron County selling seasonal fruit. Late one night they were on the main highway homeward bound when a "Ute" in front collided with a bolting horse.Jose, her husband braked and collided with the "ute", got cut badly and his right eye popped out of its socket. Meche was ok. Both undocumented and in shock they abandoned their badly damaged vehicle and fled.

The next day they came seeking support. I was able to assure them that at emergency E. R. they would not be arrested, when passing through the police control. Trusting me, Jose got seen to and did not lose his eye. We were able to set them up with furniture for their room down the road from us and then they disappeared. Last week I saw Meche in our food bank line. She told me she had returned to Nicaragua but government repression by Ortega made her decide to seek asylum in the US to bring back her two young daughters 8 and 11 who had been with her mother as well as her son recently born to her and Jose.

She crossed the Rio Grande River from Mexico in a launch near Rio Grande City some two hours away from here where she planned to wait under the bridge for the Border Patrol to take her in where she would claim asylum. The border Patrol never appeared. Her plan did not work. She and her kids are not asylum seekers, they join the ranks of 13 million more, just plain undocumented.

There is no way ahead other than keeping her head down, waiting may be a year or two. The orange season has just begun and the horse long dead and buried. At least there will be food on the table. 16/12/19 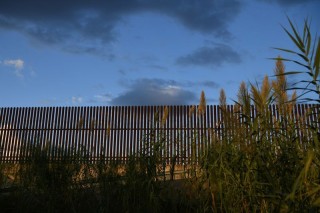 "WE ARE ALL MIGRANTS SAN FELIPE DE JESUS."

It has been a very busy year with our attention and support to Central American Migrants. Much constant and weary work

Our thanks are due to many , not only those in the photos, but many more who have come forward during the year to wait on the youth from Central America from SWKey and CHs Caliburn, nine centers in all .

As well as the brave ones who prepare food and take it over the bridge to those in Matamoros.

I am sure that God is very pleased    "WELCOME THE STRANGER" 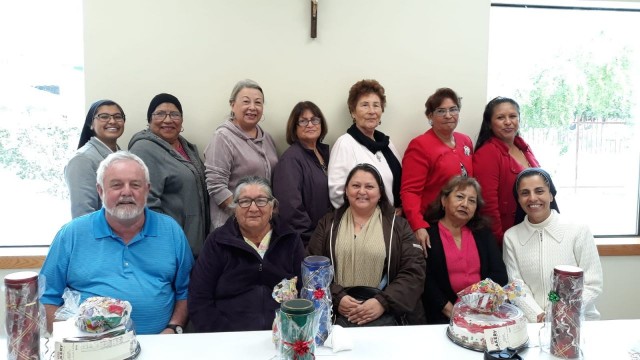 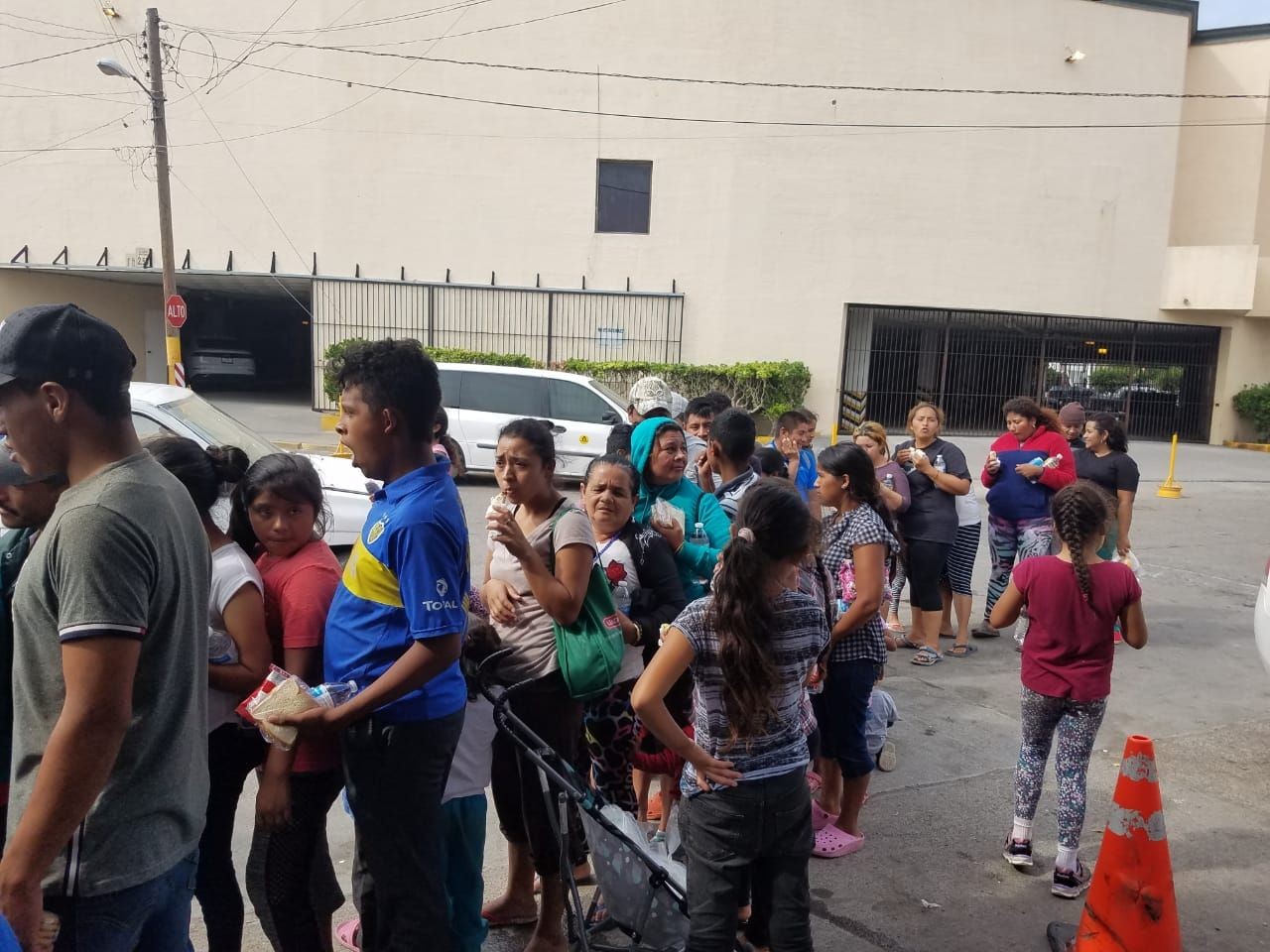 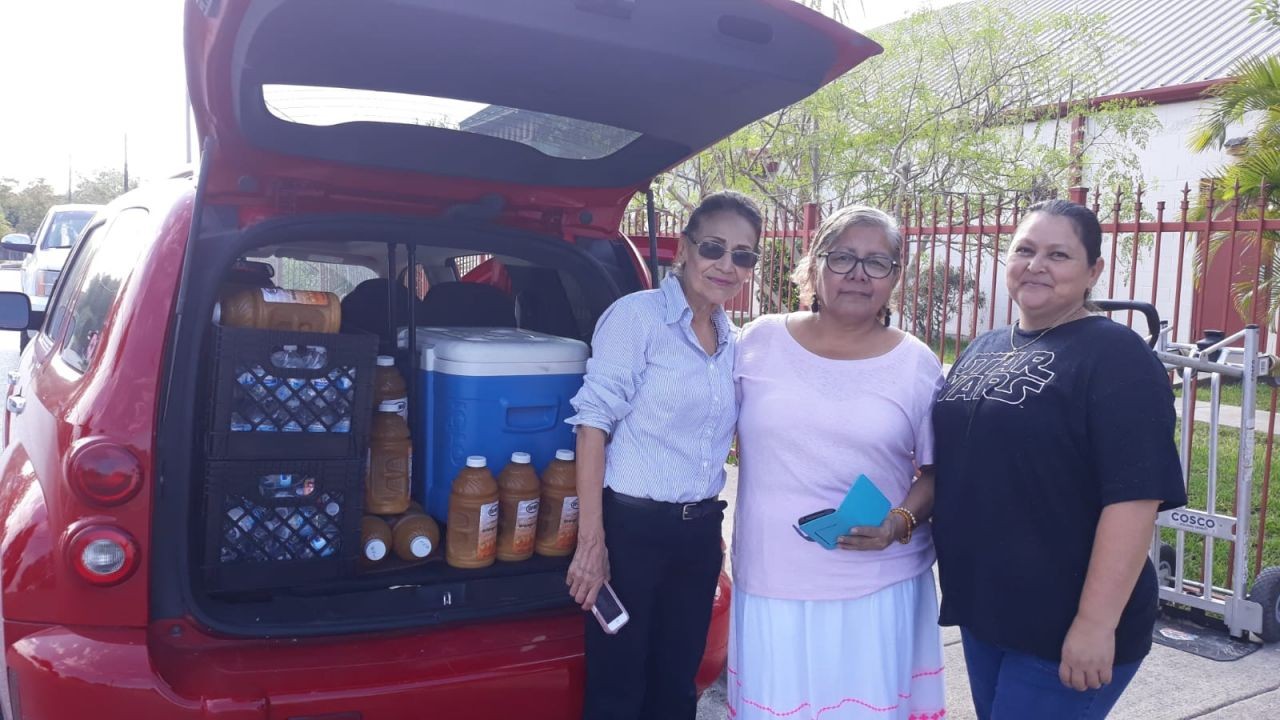 CLOTHES THAT DRESS WARMLY WHEN YOU LIVE IN TENTS.

Yesterday warm clothes collected here in the parish were handed out in Matamoros It was a cold and rained all day. The clothes did not journey direct by the high roads so as not to be confiscated by Mexican customs. Rather they took the route of the low roads and distant bridges by valiant "coyotas" as I call them (smugglers). There are over 3,000 migrants in Matamoros in tents and maybe some 600 children, not to mention the cities that stretch along the southern border to the Pacific. 20/12 /19

The centers for Central American minors has been big business for the private contractors who care for these kids who cross the border or present themselves at the bridges and by law must be received and processed, or come with their parents and still seem to be separated. But the well seems to have dried up. The centers are slowly emptying out. Centers that have 300 beds have not 17 kids. Another that has 1,800 beds now have some 60 kids.

But the contractors express no concern. In fact they are building larger centers like empty cities, cabins all in a row, hundreds of them in more than one place. Similar to cargo cults in the Pacific which await for the ships to come with the goods? They await the return of the migrant minors. Do they know something? This is anyone's guess, and why are they not coming raises suspicions that for the meantime there is maybe some sort of arrangement on the southern Mexican border. Watch this space. 18/12/19 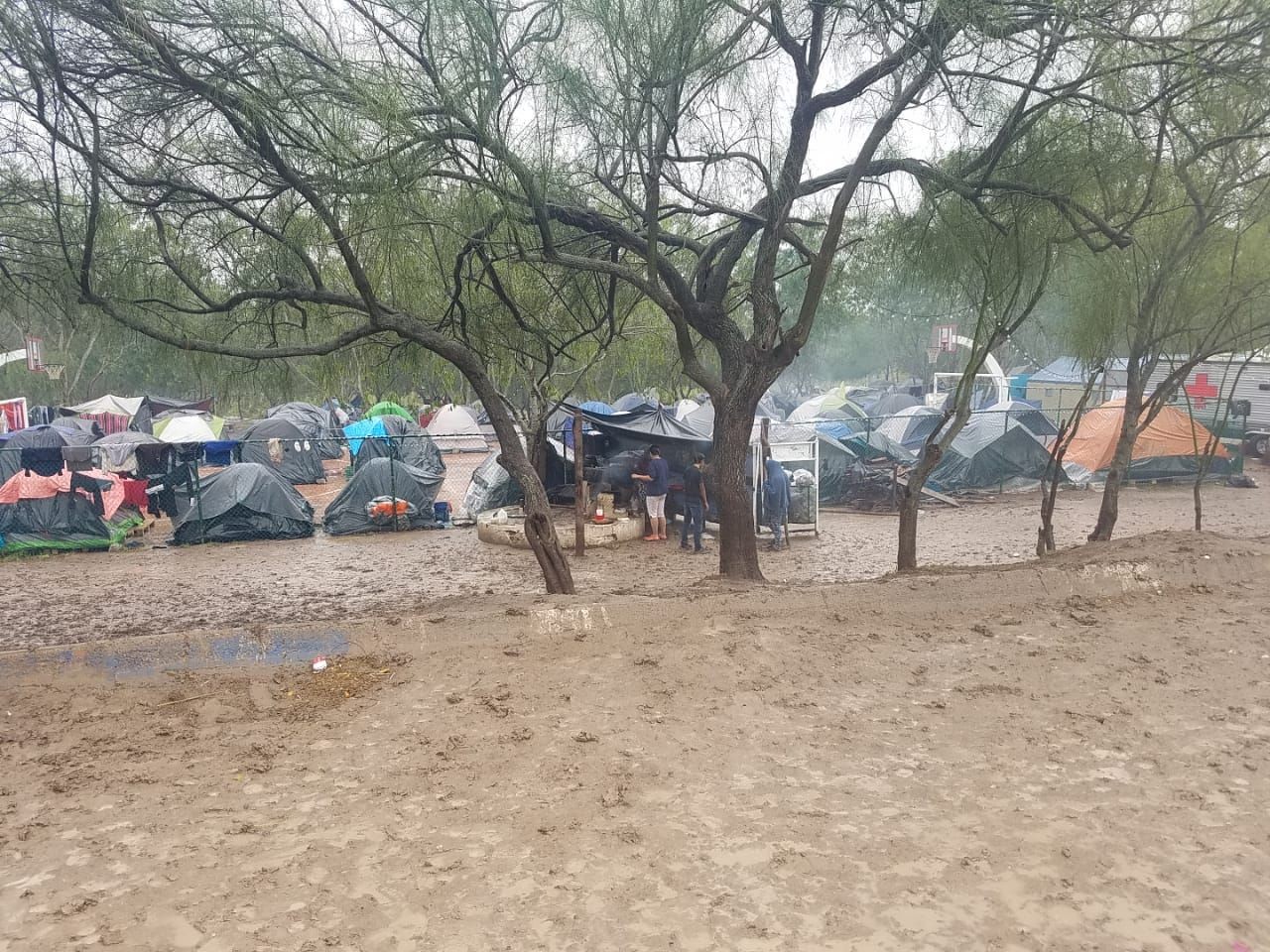 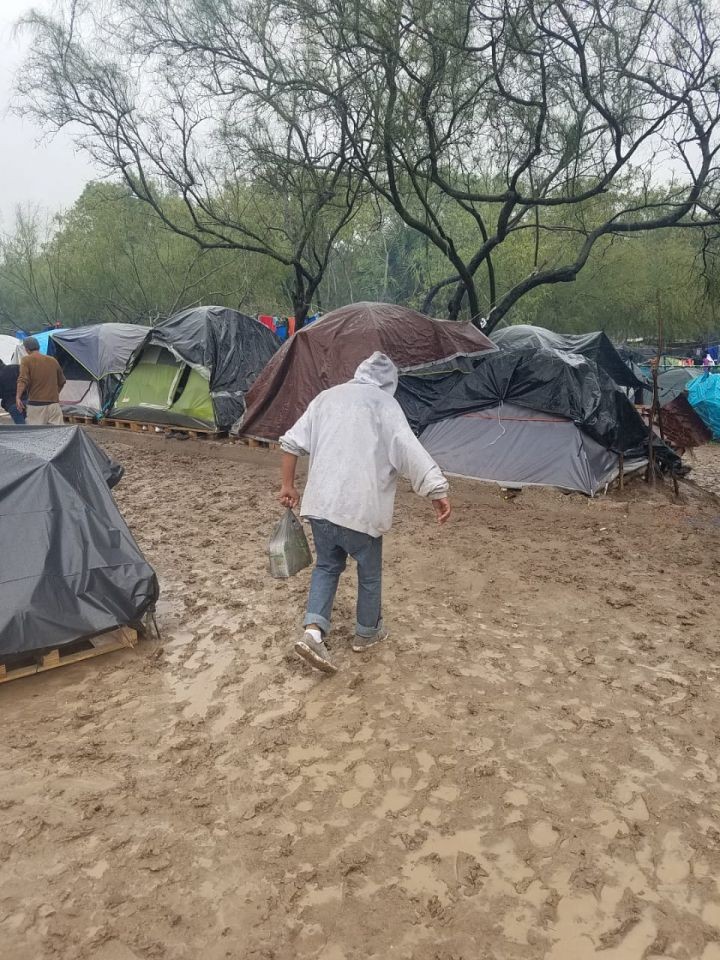 We were threatened with death by a "pandilla" (gang); they had killed my brother.They tried to beat me up, but I defended myself successfully. I went to the police,but as usual they took no action, for they were on the gang's payroll.

On October 29, 2019, we took a bus from Oaxaca without the help of a smuggler.Arriving to Matamoros, MX on November 5, we mmediately went to the tentcity near the bridge to Brownsville, TX. While at the tent city, we received the wonderful help from the volunteers of Team Brownsville twice daily.

Upon crossing the bridge, we were detained by the "migra" (US Border Patrol)for two days and then released for processing at the Brownsville bus stationand on to Good Neighbor Settlement House on December 5th. We willbe leaving Brownsville today, December 6th, for Salt Lake City where we willbe living with the pastor of a Christian Evangelical hurch. Hopefully, I willfind a job in computers.

P.S. This interview is titled "The Quiet One", for my Christian brother spoke very softly, barely moving his lips and scarcely opening them. This resulted in his leaning toward me and my leaning toward him! 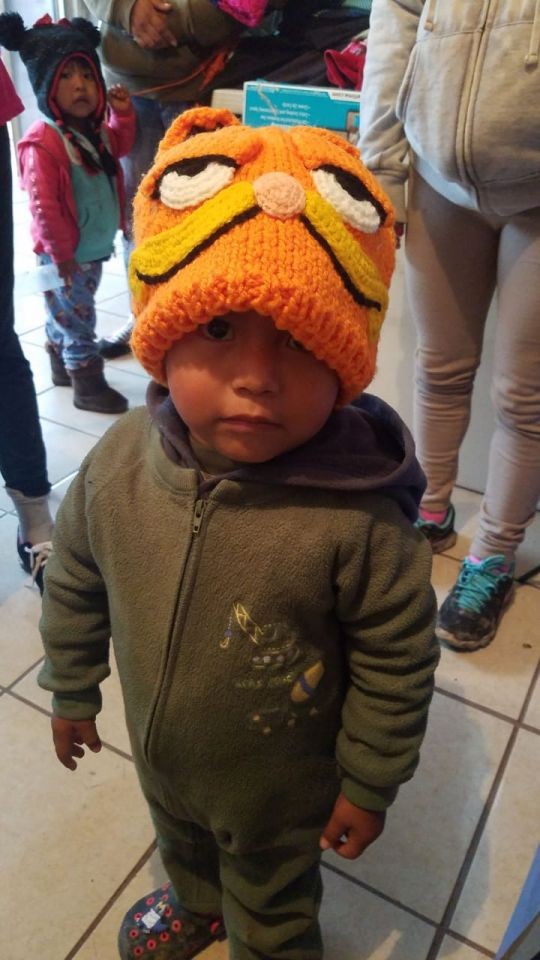 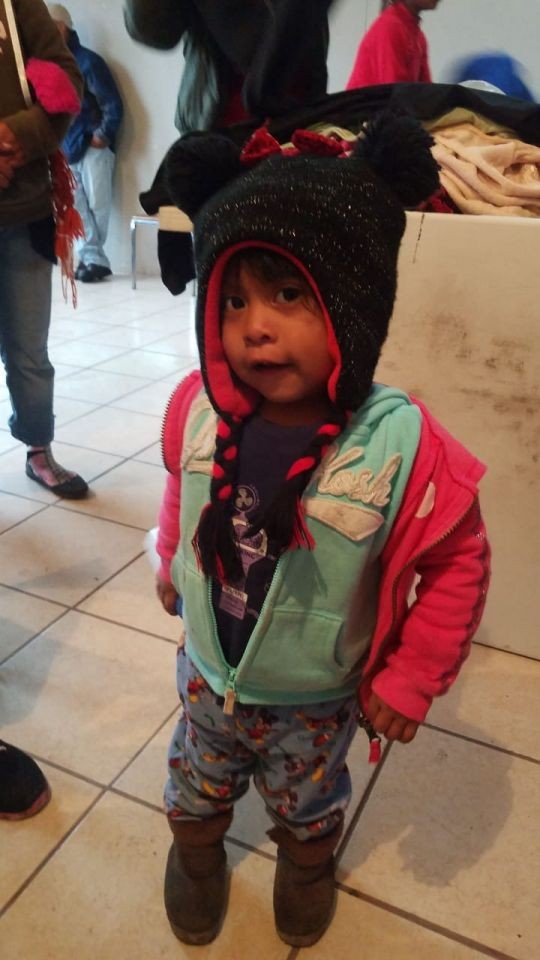 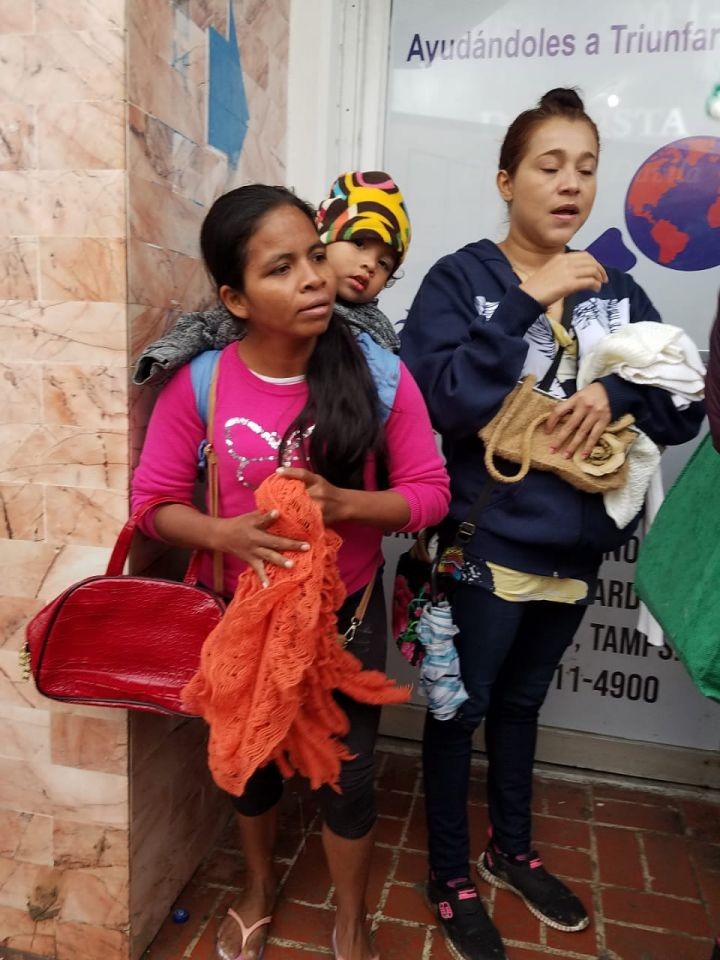