What's Going On at the Border?

Tony O'Connor, Kiwi Marist, writes from the USA-Mexico Border:    All is pretty quiet here in February. It is colder than normal which makes people sleepy perhaps? Or is there a weariness in the air? At first glance nothing seems to be happening. Lots of planes fly over without our knowing where they are going or who their passengers are. Unaccompanied Central American Minors protected by a US 2008 law are still being allowed to cross the river. But with COVID the centers for minors have them all grounded from coming to religious services here in San Felipe. Trump's Title 42 is perpetuated still by Biden because of OMICRON so they say, which means no to asylum seekers 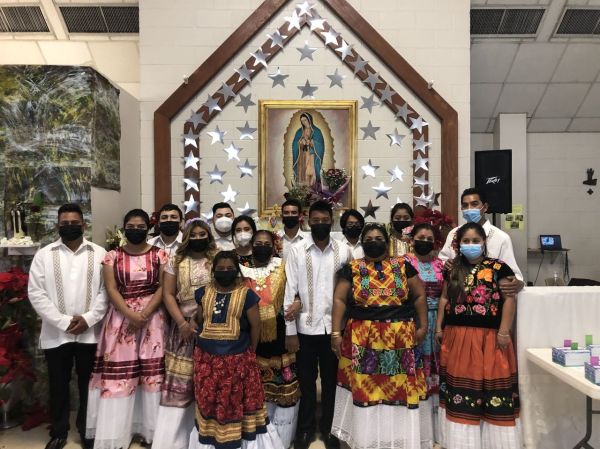 Many people crossing the river illegally are deported and many, so they say, are being allowed to stay. But we see nothing. Thousands of Texas National Guards are stationed on the border, some say for Governor Abbotts's political advantage, a two billion dollar project, have problems with suicides and discontent. But we see nothing and locally hear nothing. All is pretty quiet. They are fed up. We are just weary.

We do hear that OMICRON is ravaging some of our neighbors , and some are dying. The funeral services are offering to send ashes shooting into the atmosphere for a price of course. We see advertisements for job vacancies. We notice that the price of gas and food is each time higher, and we hear that our teachers and medical personal are exhausted. But I guess we are all a bit weary , all a bit sleepy, immersed in our own daily chores. The press has not been down hereof late, making noises as they do, stirring up indignations or expectations. But to be sure they will be back when migration trouble brews again this spring. The traffic is more aggressive in our streets, panic attacks are reported as more common, indicating new stress levels in our world. Some shelves in our shops can be half empty. They say it's the supply chain, whilst almost everything is not pre-pandemic efficient any more .Life goes on, but sleepily it would seem .  Voter registration closed recently and some say that the candidates who will win are sure to be the moneyed ones. Because with money they are not so likely to accept a "bite" ("mordida") Funny reasoning. Life is quiet. It is not better .It is just quiet. As photo B says when knocked down just "take a nap"   Here in San Felipe we are living too with a certain weariness, as if in a seeming siesta. But then on the other hand we are busy, we are active, we are doing all we can. 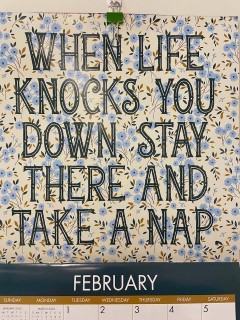 SOPHIE  The situation of some people never ceases to surprise us. Little Sophie is two years old. She comes to the3.00 pm mass every Sunday when we have the special mass for the Unaccompanied Central American Migrant Minors from the detention centers. Because of OMICRON the mass has been suspended temporarily. No one knows who Sophie's mom is , nor who her dad is for that matter. Nor do they know Sophie's country of origin : Guatemala, Honduras or Salvador? She smiles a lot, is a happy child. The employees of the center where she is housed are very fond of her , maybe more so because of the pain they feel for this little waif with no history, nor lineage. One thing that we do know about Sophie is that on the Sundays when she comes to mass she likes to eat cream cake. (a local cake shop gives us cream cake for the kids) Someone visited Sophie in her center last week and she asked why they had not brought her pastel (cream cake). She is only two years old. 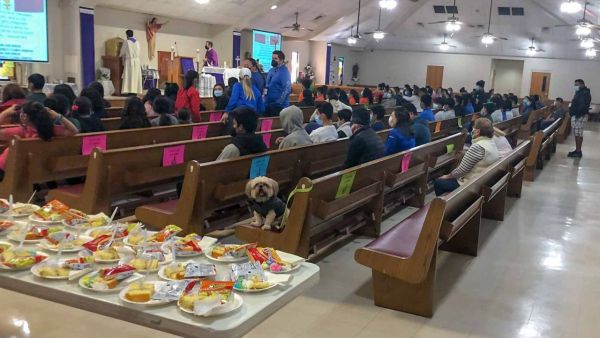 The amount of food arriving from the Rio Grand Valley Food Bank is phenomenal. I would say it is too much. This is ironic when over the river the people are really hungry. Last week we had distribution as always on a Thursday at 9 30 am and then during the day two large trailers came with food. We understand that the first one came because it was destined for Rio Hondo further up the valley. But the agency there did not want to receive it. So they sent it to us because we never say no. 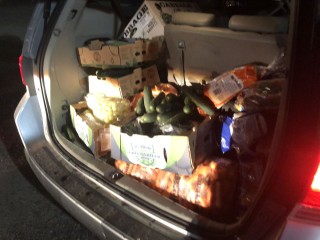 Maybe their volunteers were paralyzed by COVID or it was raining. Who knows? Our volunteers with the second trailer were distributing until 8 00 pm in the dark. Cooperation by people in general in san Felipe is not that good. But the food ministry volunteers , 50% of whom are from the Christian church up the road are all very committed, probably and partially because they get a lot of food in return and usually the pick of what is being offered. That is only fair. However we are being advised that there is going to be a serious reduction and return to a pre-pandemic restricted food supply soon which will be only for the truly needy. 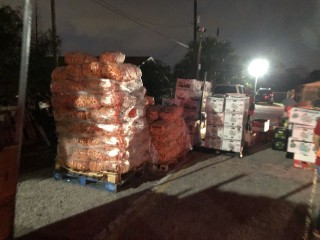 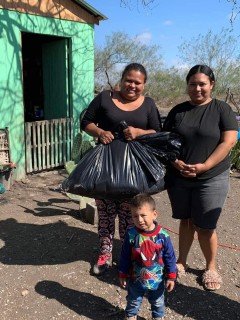 The recently arrived young Jesuits who are very active along the border, mainly in their communications ministry of weekly podcasts received a truckload of clothes but dumped it in the end. They could not get past Mexican customs and would have had to pay a lot of money. We cross our stuff little by little and constantly, undetected: food ; clothing; blankets;shoes and all sorts of other things. As they say in Peru "little by little the old lady spins the yarn" ("poco a poco la vieja hila el copo")

CONFIRMATION RETREAT   In late January we had our first confirmation retreat. Some 40 kids of years 1 & 2 assisted. 14 kids were absent. The numbers of our various catechetical programs are 50% of pre-pandemic numbers. With our youth you have to try and activate them (physical exercise) putting oxygen into their systems to get their "dry bones covered in flesh again". We chose real life themes by posing questions for them to answer into a personalized and nicely prepared little booklet for each. The answers to the questions were only for them. There was no airing of answers. We have the second retreat on the 23 of May. The questions were by no means pious: Mental Health; Emotions; My Identity; My Sacred Place; and Faith. They would have found some of the questions disconcerting but real nevertheless in these times when their worlds have been turned upside down. We also looked at the call of Samuel and Moses and introduced them to the song "Horse with no name" by "America". It seemed apposite and got the ball rolling.

They had the opportunity to learn about Japanese KINTSUGI   recognize their brokenness from the questions and smash their cups within the brown paper bags, symbols of their brokenness as you can see in the photos.

They have two months to ponder their questions and if not their brokenness then the brokenness and the new changes in their / our world. On the 23rd of May we will come back with the second retreat hoping to build a more solid basis for their wanting to engage with their lives, and even get confirmed in their faith. They maybe even decide to live without cell phones. Just joking! 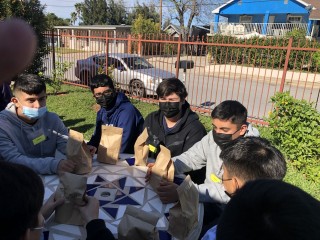 We have been until recently "full on' with unaccompanied Central American minors visiting us each week for mass etc. maybe 200 plus. However the centers suspended their visits because of the OMICRON Variant. They are still away which was initially a relief and a needed rest for us. We continue to transmit a religious program on Wednesday afternoons by internet and now our transmissions have been extended nationally, not only to the Rio Grande Valley but to centers in Arizona (5),California (3), Houston and San Antonio. We are hoping that the kids will be back in person to celebrate mass with us soon, drink coke and eat tacos and cream cake. Little Sophie too. 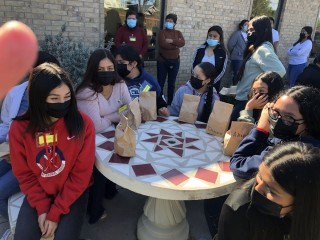 MEETING WITH THE SHERIFF

Recently we met with the new Sherriff of Cameron County. Our Cameron Park has gone backwards with regard to gun fire with subsequent lost bullets , drug peddling and boy races. But a balance has to be struck. A house some six lots up from where I live was destroyed by arson recently. Rumor has it that it was set fire to by the "Cartel del Golfo" and the owner and his son were found riddled with bullets on the perimeter of our Cameron Park. Rumor has it also that the victims had been cooperating with the Sherriff. All was so quiet apart from sporadic gunshots in early morning hours but the long arm of the cartels it would seem, can reach out across the river to our little "colonia". A far immediate threat to the safety of our people here are the dogs in our streets. It has not been very unusual this year to see some fifteen dogs loose in the street chasing each other and sometimes people. There have been reports of people being attacked . Not just by pit bulls. That was my agenda with the sheriff . It is all very well about busting the "Stash Houses' but what are you going to do about the dogs? I was told that there were no ordinances for the police to control dogs in Cameron County. The police can do very little!!! Animal have rights it would seem. More rights than toppled over old ladies.

I would say that the attendance is about 60% of pre-pandemic times. The same faces you see each Sunday or some once a month. I believe that weariness and malaise has set in to a certain extent. We don't need to go to church after all or unless life really kicks you in the guts and then you come back? Seriously I think it just takes time for fear to be assuaged and basically to get around to coming back. So in the meantime, just take a nap! 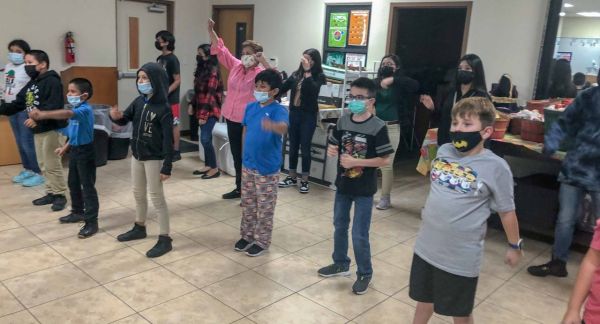 One thing is certain. When we awake from the nap, it is to mostly blue and sunny skies, birds on the wire and in the trees, lots of glimmering waterways and larger birds swimming there. There are beautiful people all about too.    We are truly blessed. 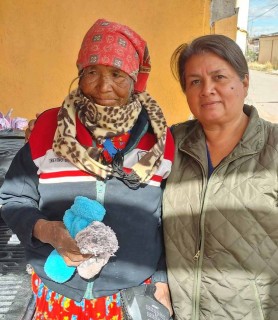 Really appreciate Tony’s writing. Good to be reminded of wider situations than those right in front of us
May Mary deepen our hope

Cancel Reply
Really appreciate Tony’s writing. Good to be reminded of wider situations than those right in front of us May Mary deepen our hope
Cancel Update Comment
1