A letter from Thailand ​ Br Paul Murphy fms, Australia, recently sent this letter from his mission in Thailand:    A grey ribbon of narrow road, hedged by brush and swamp, snakes ahead running from 'somewhere to nowhere' until it bursts upon the shore of the Gulf of Thailand where finger wharves encompassed by tiny trawlers bob and ebb on a grey green sea. I had just come two hours south east from Bangkok to 'Hope's' most beautiful school at Wat (temple) Sirimonkon on the edge of the region of Samut Sakhon.  Wat Siri is a beautiful, loving school surprisingly part funded by the Thai government and nestling on the side of two active temples, both Buddhist - one Thai, the other Burmese. The school is supported by 'Hope' in so far as we provide one nourishing meal a day for the 175 students as well as teacher support. Last year the staff requested help to provide new classroom infrastructure for the forty-one, tiny tot, pre-Kinder kids pictured here. With the task completed in my absence I needed to check the project and speak as best I could with the dedicated, non-English speaking staff! I was delighted to learn that the job was indeed finished within the budget, meticulously accounted for and in use. Funded thanks to St Veronica's Association Brisbane. 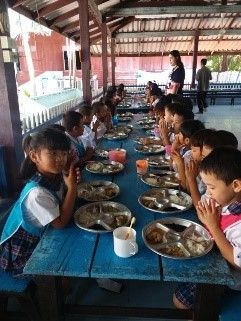 However, behind the good looks and laughing faces, these children hide huge livelihood issues emanating from their ramshackle homes where their undocumented migrant-worker parents, pressed down and overburdened by low-paying or even non-paying jobs, must tussle with life threatening bosses, ruthless brokers, many unscrupulous local officials and unimaginable destitution. But to be fair, while one cannot condone the often-criminal action of brokers, they too must live, and many are victims themselves of a system which demands higher profits for international corporate shareholders. It's all so complicated. As our Francis says 'the planet's pain is borne …. by the landless, while far off foreigners reap the profits.'

​ Leaving Wat Siri and heading further south, first crossing the Tha Chin River, the doyen and heart of 'Hope' our indefatigable leader and I head for the area of Phetchaburi. Here we had heard of another Burmese community in desperate need. Words are off the scale to try to describe their situation. These people we discovered were living in conditions in which you wouldn't keep your rabid dog! Their work is to break open, with great patience and difficulty, the grey-green, elliptical mussel shells and scoop out the flesh which one day will appear as tasty morsels on someone's 'cocktail crackers'. In return they get all of 60 cents per kilogram of product which in time will retail, tinned or bottled, for somewhere around $350. Yes, and they must buy their own ice too! A million sun-baked empty shells adorn the entrance to their shanty rooms (rent $130 a month) while the surrounding ground is slimy and slippery from the scrapings. The smell is just so…. well you know I've run out of words. I am proposing we try to start a class here one day a week to give the community some hope and for them to know we care. The children cannot travel as they are undocumented, have no money, nothing but rags to wear and they smell of fish. In any case their efficient, nimble fingers need to be on standby each afternoon once the trucked-in molluscs arrive. This is the moms and kids work as the fathers are busy in the scores of surrounding factories - to paraphrase Francis 'as shepherds, do we still carry the smell of the flock?'

Australia down under & under attack
Beloved Amazon - Pope Francis

With thanks for that insight.

Cancel Reply
With thanks for that insight.
Cancel Update Comment

Thank you Ben for passing this on to us, and such realities!

Cancel Reply
Thank you Ben for passing this on to us, and such realities! Paul SM
Cancel Update Comment
1